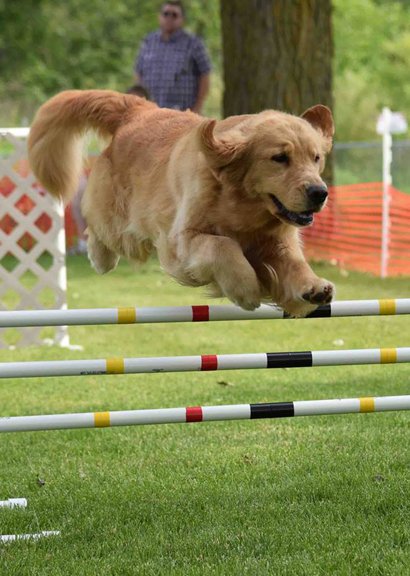 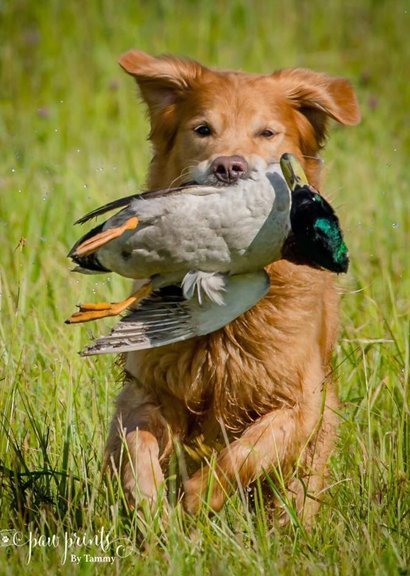 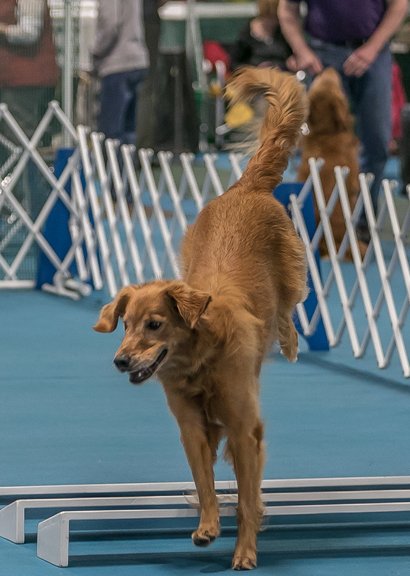 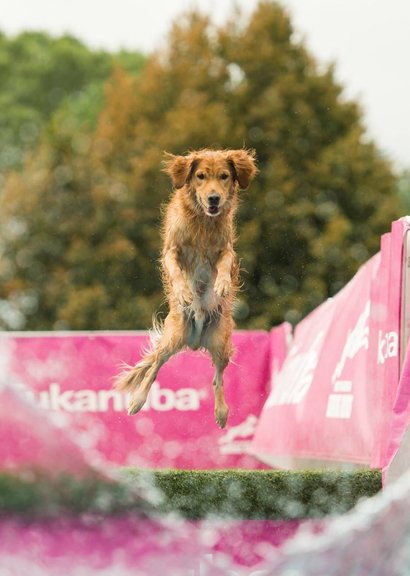 So You Want a WC/WCX On Your Dog

The first step in any attempted field training is a basic course in obedience. If your dog can’t heel, sit, stay, come, and has never had a leash and collar on, he won’t learn very much “field” his first day of field training. Get the basics out of the way first!

After the basics, we attempt to introduce a foreign object into the dogs’ mouth. Now, most Goldens prefer dirty socks or the dish towel. However, this makes for difficult “marks” in the field. A dish towel rolled up and fastened with string is perfect for those real young pups, especially if they are in the process of getting their adult teeth. For those older, we go directly to the small canvas or rubber bumpers. From holding the bumper while sitting, carrying at heel and then retrieving it while on lead, we advance to introducing a “gunner,” an extra person to start looking for when a handler says, “mark.” The gunner will throw a single item for the dog to mark and retrieve.

Over a period of several months our gunner will lengthen the distance he stands from our new protégé, always making sure that the dog is comfortable with his new found game. Not only should the distance be lengthened, up to 80-100 yards, but the type of terrain should vary, to give the dog experience in high and short cover, going over ditches or dirt roads, through thick cover or across plowed fields or cut corn rows. How about a field with baled hay? Anything that will give your dog a chance to use not only his eyes and nose, but also his brain! Who knows what type of terrain he’ll meet when he sees his first TEST.

After your dog has become accustomed to retrieving canvas or rubber bumpers, it is appropriate to introduce him to birds. Some dogs will make the jump with no problem. Others will need some extra work. A pigeon, pheasant or duck wing tied around a favorite bumper will give the flavor and feeling of feathers without the problem of, how do you pick this up? Later, a whole bird can be substituted.

Now it is time to regress. The dog has been “lengthened-out” and now he has to learn DOUBLES. The handler can start by throwing two bumpers out while holding the dog on lead, making sure the throws are greater than 90 degrees apart and well visible where they lie. The trick is to get the dog to bring back the first one before he goes for the second. Sometimes a long line attached to the lead will facilitate the decision to return home before being sent out again.

Hopefully by this time, the dog will be well-mannered at the “line” so he can return to heel and deliver the bird without undue confusion. The second bird is the hardest because memory is involved, not just marking. Precious seconds tick away and memory fades as handler and dog try to get their act together between birds. Ideally, the dog should be “steady” so there is no jumping the gun to retrieve before the handler is ready to send.

When the dog is comfortable with the handler throwing doubles, one or two gunners should be introduced. The variety is infinite from here on out. One gun can stay a constant distance while the other moves out further, both guns can lengthen out together; the variety of terrain can be exploited, etc.

The main thing to remember is that each dog is an individual. One will learn doubles quickly, another will run a 120 yard mark with no trouble, some will hate to have feathers in their mouth, some love the water but only when it’s in a bowl. Each step in this educational process takes time. Don’t try to jump ahead to a double with two 100 yard marks just because Rover can handle a 100 yard single mark with ease. If your dog seems to be having trouble, take a step back. Whether that means shortening your double or going back to singles, do what is necessary so that both you and your dog can overcome the barrier and go on to the next challenge. A jump from 100 yard marks on a football field, to 100 yard marks in heavy cover is unrealistic. Shorten up the mark in the heavy cover and lengthen the distance after a few throws. Keep the gunner at the same spot and move the line back to increase the distance.

A triple retrieve is taught the same way as a double. But, some dogs seem to have a real hang-up between two and three birds. Hang in there. Sometime, that third bird will become as natural as two. Make sure that in practice, the lengths of the three marks vary. Run three short, three long and a combination. Just as in obedience training, if you practice for long sits and downs longer than is required, the dog won’t get upset if the judge forgets to look at his watch. So, the distances of the three marks should vary so that there will be no surprises come TEST day.

The easiest way to make a dog “water shy” is to throw a puppy in very cold water before he has been properly introduced to it. Having a pair of hip or chest waders makes the job a whole lot easier. A romp through shallow water with a puppy tagging along at your heels, fixes the image in the dogs’ mind of water as an enjoyable place to be. Shallow “running” water is a good place to start with short retrieves. The puppy or dog has the confidence of solid ground under foot and the feeling of the water as he charges through and tries to figure out how to pick up a bumper in the water. Gradually lengthen the throws until his feet leave the bottom and he has to actually swim. If necessary, you can encourage him to go deeper by wading in with him.

Once the dog feels at home in the water, lengthen the throws and then start throwing the bumper into light cover. Again, the more the dog has to use his eyes, nose and brain, the less he’ll be surprised with at the TEST. Some ponds have a lot of sticks and floating logs, others are full of lily pads, many with flowers. Cat tails and duck weed are another treat as are sandy and muddy bottoms.

A duck should be introduced carefully. Most dogs find it difficult to pick up a duck on land. So, practice his pick-up on both water and land. The agony of trying to convince a dog to pick up the duck he has dropped, two feet outside the WC circle and is unable or unwilling to bring it back is indescribable! This problem should be confronted and solved in a training session, not at a TEST.

While practicing the “back to back” singles for WC, both guns should be in view of the handler and dog to eliminate confusion. If in training, the dog sees only one set of guns on water and is suddenly confronted with two sets at the TEST, it might be enough to blow his mind.

Doubles on water, for the WCX, should be approached in the same manner as multiple marks on land. Once the dog is comfortable with long marks in the water, the handler can throw a double from the line, using a long line if necessary. Remember to keep the long line taut so it doesn’t get tangled up in the legs of your great duck dog.

Do not forget to introduce your WCX dogs to decoys. Set up two-four decoys close to shore and throw a bumper among them. Have the decoys anchored by some line and far enough apart to keep from entangling your dog. The dog won’t get caught in the anchor lines and will have a good look at the decoys as he is retrieving the bumper. A gentle “NO” as he sniffs them should suffice to keep him from picking them up.

The honor in the WCX is probably the hardest part to teach an eager dog. He can’t understand why he must wait and watch another dog get his duck. For starters, two or more dogs can be held on lead while a bumper is thrown. In turn, each dog is allowed to retrieve, but only if they have sat calmly. (When I send my dogs to retrieve a mark, they are sent on their own name, not on “back,” in case another handler uses “back” and my dog is confused if he is supposed to stay or go). They will eventually get the idea that they must sit and stay before getting their turn (remember those obedience lessons?). I like to use a tennis ball with my three at home. The dogs get just as excited and it is easier to slip a ball into a pocket while taking a walk. When the dogs have become reasonably steady, switch to a dead bird and eventually a clip-wing pigeon or shackled duck. This is the ultimate in self-control.

Now, you have the basics to train for the WC/WCX. It is a good idea to use a shotgun with poppers occasionally to get the dog used to the loud noise. Every dog will have a problem here and there. Don’t give up! Ask around to see if anyone has a suggestion. Remember that every dog is an individual. What worked for one dog, might not work for yours. Use your own judgment and keep this sport a happy experience for both you and your dog. This is what the “Retriever” is all about in our breeds’ name.

The WC and WCX rules can be found here. Be familiar with them and don’t hesitate to ask a question of a judge before a test to clarify any points that are not clear to you. Also, remember that the WC/WCX rules are based on the field trial rules for the Derby (WC) and the Qualifying (WCX), and you can view those rules on the AKC website.